Sacred companionship in following a great calling; this is what I am endeavoring to do. I share with you some pieces of the deepest and most profound experience of great calling in doing the work of “Wounded Knee.”

First and foremost is anunciation. I choose this word especially to honor the mysterious, but unmistakeable way the “holy” made itself known in my small life. There assuredly cannot be any greater treasure nor gift than a direct knowing of mystery’s personal and intimate love, radiance, omnipotence, and infinite power. Great, deep, unmistakable, and ever evolving comes this greatest Love. From the foundation of this tender and great relationship, all things become possible. For what seemed like a very long time, I lived in wonder at what my next life purpose might be.

Then, I met Saniel Bonder right after the END_OF_DOCUMENT_TOKEN_TO_BE_REPLACED

In the spring or summer of 1890, Lost Bird was born somewhere on the prairies of South Dakota. Fate took her to Wounded Knee Creek on the Pine Ridge Reservation on Dec. 29, 1890.

On that tragic day, hundreds of Lakota men, women and children died in a confrontation with U.S. troops and the woman who likely was the child’s mother was among them. But as she was dying, she and her baby found some scanty shelter from the bitter cold and wind in the bank of a creek.

Four days after the massacre, a rescue party found the infant, miraculously alive, protected by the woman’s frozen body.

The infant was passed from one person to another and her sensational story attracted the attention of powerful white men. 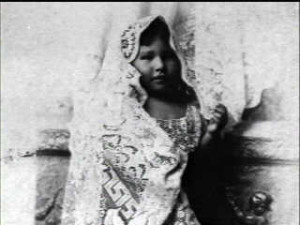 Eventually, this living souvenir of Wounded Knee ended up in the hands of a National Guard general.

Lost Bird was adopted by Gen. Leonard Colby and, without her knowledge or consent, his suffragist wife, Clara Bewick Colby. The baby’s original name died on the killing field, along with her chance to grow up in her own culture. She became. literally and figuratively, Zintkala Nuni, the Lost Bird.

So Lost Bird – Zintka, as her adopted mother called her – END_OF_DOCUMENT_TOKEN_TO_BE_REPLACED